The reforms in economic, cultural, educational and other policies of the Habsburg Monarchy, introduced under the rule of Maria Theresa, gave rise, in the time of Joseph II, to numerous schools that provided education for wider strata of the population, which at the same time brought major interest in cartographic works. Under Joseph II, the first topographic survey of Austrian lands, the so-called »Josephinian Land Survey«, took place in the 1764–1787 period. At this very time, the first school and postal zone charts appeared. During the time of the Illyrian Provinces, French hydrography engineers carried out the first surveys of the Adriatic east coast. From 1806 to 1869, the Franciscan Survey of Austrian lands was carried out, in which the basics for several nautical charts now held by the Maritime Museum Sergej Mašera Piran were given.
The collection of nautical charts of various dimensions was printed between 1833 and 1952; they cover all world seas and coasts along them. The charts display characteristics of certain navigation zones and parts of the coasts visible from a ship, which is highly important for safe and economic navigation. On the hydrographic part of the charts, all pertinent morphological characteristics of the sea floor are given, from the sea depth and composition of the sea floor to the ridges, alluvial deposits and shoals, islands and archipelagos, lighthouses, sea currents and numerous navigational hazards. Quite often, magnetic roses that enable quick orientation on the charts are also drawn. The topographic parts of the charts show characteristics of the coasts and coastal zones. Also presented are various land forms and all geodetic, orientational or otherwise significant points; these are marked with symbols and abbreviations. The hydrographic and topographic parts of the charts are divided by coastlines. Each chart is made to a certain scale, depending on its purpose and area covered, which is of major importance for safe and economic navigation. 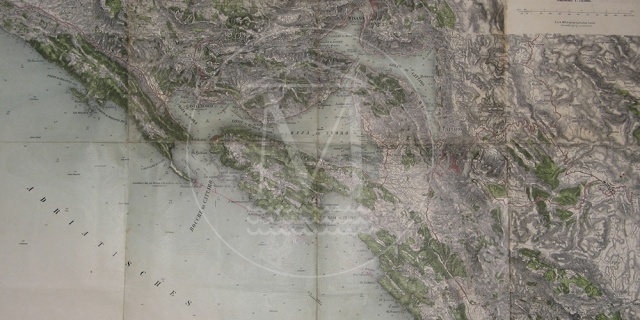 Map of the Gulf of Kotor 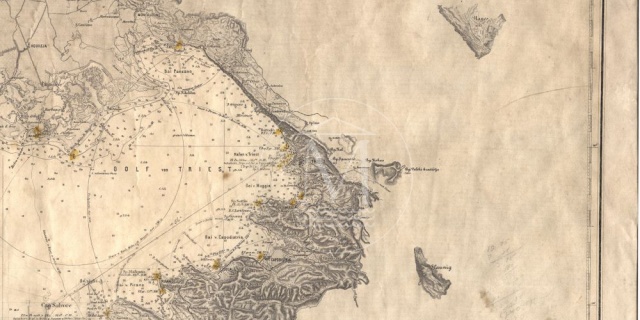