The Maritime Museum was founded in 1954 as the City Museum Piran. Its first Director was historian Dr Miroslav Pahor. At the initiative of the President of the Seafarers' Club of the People's Republic of Slovenia, the newly founded museum increasingly gained a maritime character.

With his maritime conception, Pahor also attracted other Slovenian museums to take part, which eventually lent or donated to the Museum their maritime artefacts. Through the acquisition of new items, the first maritime collections were thus created. In the maritime history research, some acknowledged experts also took part, such as historian Dr Ferdo Gestrin.

Until 1963, gathering of maritime material could take place only in the area of Piran Municipality, while from 1963 on the Museum was able, owing to the Republic's financing, to start functioning outside the Piran Municipality's, initially in the territory of Slovenia and eventually also in the territories of Croatia and Montenegro. With its specific collection, the Museum was gradually transformed into the only museum of this kind in Slovenia. In 1967, the City Museum was renamed Maritime Museum »Sergej Mašera« Piran, acquiring its name after Sergej Mašera, Lieutenant Commander of the Yugoslav Royal Navy, who on 17 April 1941, after the capitulation of Yugoslavia, blew up and sank, together with his former school mate, Serbian Lieutenant Commander Milan Spasić, the »Zagreb« destroyer lest it should fell into the hands of the occupying Italian Navy. Mašera and Spasić, who followed the fate of the ship and sank together with it, were later proclaimed national heroes of Yugoslavia.

The Maritime Museum' professionals actively collected material and data on Slovenia's maritime history as well as maritime past of the Primorje costal region and Istria, particularly Piran. Furthermore, they spread collection, study and presentation of the maritime museum material to the wider territory of the Socialist Republic of Slovenia. In this period, the professional activities of the Museum were focused on the history of maritime enterprise, which was a totally new activity as far as Slovenian museology was concerned.

In the working reports of that time it could be read that the Museum had, apart from its cultural-historical and maritime collections, archaeological and ethnographic permanent exhibitions and a lapidarium, whereas numismatic collection had not been exhibited as yet.

As maritime ethnological and history-of-art material was also piling up in the Museum, which waited to be professionally processed and presented, the Museum was in urgent need of other experts as well.

The Museum's development was marked with new staff reinforcements and a new, different approach to work. Its curators regularly and conscientiously carry out their museal professional, publicist and pedagogical work as well as research, exhibitional and project activities and carry on with the set out collection policy of the Museum.

It is in the interest of all that with the understanding of people, their environs and the wider society the maritime heritage in this sphere is preserved, the same as maritime tradition in the hinterland of Slovenia. 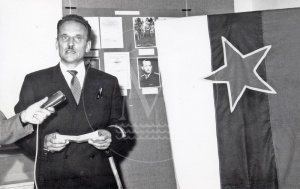