Within the framework of the visiting inter-museum exhibition "Women's stories; mythic images and reality through museum items" held at the Maritime Museum "Sergej Mašera" Piran, Barbara Trnovec, anthropologist, researcher, publicist and museum consultant from the Provincial Museum  Celje, highly impressed the audience with a superb lecture on Alma Karlin’s life story and travels  all over the world. Several of the people present had already heard about Alma M. Karlin (1889-1950), writer, journalist, amateur researcher and world traveller, while the details and causes that shaped her personality and directed her life path were heard by them for the first time at this very lecture.

With a rich and elaborate selection of photos and a vivid interpretation, Barbara Trnovec managed to perfectly portray the personality of Alma Karlin, who surpassed all possible limits; the limits of physical limitations, her gender, social class, her national identity, physical distances, as well as the limits of spirit and time. The listeners were enthralled by Alma's disclosed ideas, which are still fresh and highly relevant today, and by her extraordinary ingenuity during her eight continuous years of travels all over the world, when she supported herself with part-time work along the way, which places her among the greatest travellers of all time.  Alma made the great majority of her voyages by sea, and she always travelled alone. At the end of the 1920s and in the first half of the 1930s, she achieved great success as a writer and traveller – in Europe and beyond. Barbara Trnovec also gave an account of Alma's last dark years, right to her bitter end. Furthermore, she elucidated all the untruths spreading around Alma, the woman who was so very different from others and attracted so much attention with her physical appearance and lifestyle, in her earlier years till this very day.

Alma's life path is symbolically illustrated by the tree that grew on her grave until October 2016 and is now on display at the Women's Stories exhibition.
It is said that Alma Karlin had expressed her wish to have this unusual small tree – a spindle tree – planted on this very spot. In 2016, however, it was brutally cut down. And it was Barbara Trnovec who salvaged it from inglorious end and oblivion. Parts of it were fastened together with a special Japanese technique, and the plant embarked on a new life path, this time as a museum exhibit. In Greek, the botanical name Euonymus means well-named or to have luck, which was undoubtedly well known to Alma M. Karlin. 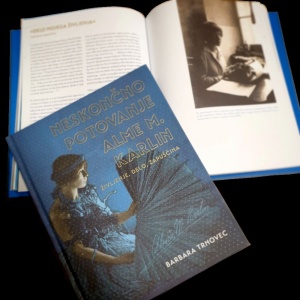