The heritage of the saltpans - the kitchen of our grandmothers

The saltpans were the scene of a culinary show created in cooperation of the Koper Regional TV Program, the Maritime Museum Sergej Mašera Piran, the Italian Community in Piran, the Italian community “Giuseppe Tartini” Piran and the Institute for the Protection of Cultural Heritage of Slovenia.

A series of short shows has emerged in which the main theme is the invaluable cultural and natural heritage of this protected area. Part of the treasure are also traditional dishes that the locals still prepare, as the recipes of dishes from local ingredients are not lost, but are passed down from generation to generation. The locals, whose lives are connected in various ways with saltpans and salt-making, stepped in front of the camera and showed the preparation of dishes that were also eaten by their ancestors.

On October 2, in Monfort the former warehouse of salt, we had a public presentation of shows entitled Heritage of salt pans - the cuisine of our grandmothers, which captures the richness of culinary tradition and emphasizes the importance of preserving traditional salt production.

You are kindly invited to watch the show! 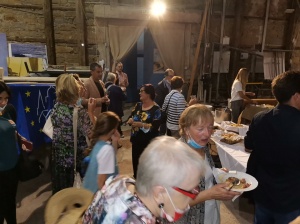