From the biography written by Jolanda Gruden, nee Mažer, on  27 March 1956, we can learn what the life of the then 26 years old inhabitant of the Primorska region had been like till then. This CV is of major importance also owing to the fact that in it she clearly defined her profession as pomorščakinja (woman seafarer). She was born on 9 May 1930 at Nabrežina to father Edvard and mother Ida, nee Bortolotti. At home she was called Joli, as she was also referred to later on by her schoolmates and friends. Her schoolmate Jordan Zahar named her Jola Grunova, while some of her ship colleagues as well as journalists called her sailor Jole.

The Gruden family had three daughters: Jolanda (Joli), Teodora (Dori) in Marija Luisa (Marjuči). They lived at Nabrežina No. 182. Jolanda completed five years at an Italian primary school, initially at Nabrežina till 1941, then two years at an Italian secondary school in Trieste. Upon Italy's capitulation she left and continued her schooling only after the end of World War II (in 1946). In 1944 and 1945, she took part in the resistance and national liberation movement. She was an informer for the 9th Corps’ Intelligence Centre.  In 1944 she became member of the Youth Organization and took an active part in it. In 1946 she was accepted into SKOJ, then enrolled at the Slovenian Secondary School in Postojna, where she completed three years of schooling, passed the so-called little graduation examination as well as completed the fifth year of the secondary school, all very quickly by the autumn 1947. She was a tall, slender, likeable, dark-haired girl of a lively character, who was always ready to tackle all possible challenges and tasks, not fearing anything in those years.
On October 1947 she enrolled at the Merchant Marine School at Žusterna near Koper and passed differential exam for the second year schooling. From her home she watched the sea and in spite of the fact that she was not from a seafaring family she found herself, »just in passing« as said by her, at sea. In fact, she was not particularly attracted by it at all. But »her life path slowly, unpredictably directed her towards the sea.« Her father was not too satisfied with her decision, and certainly not after she boarded her first ship. When she decided to marry, although a seafarer, this was in his opinion her smartest decision till then.

In August 1948, during her school holidays, she worked on board the ship Vida of the firm Agmarit Piran and was accepted into the Communist Party of Yugoslavia. In the same year she attended, together with her schoolmates and the Trieste youth, the Sokol All-age Gymnastics Meeting in Prague. In spring 1948 she took part in the carrying of Tito's Relay. On 22 June 1950 she passed the graduation examination. Jolanda took part in Youth Work Brigades twice. In 1947, during her school holidays, she volunteered to participate for three months at the Youth Work Action Šamac - Sarajevo. Three years later, after passing the graduation examination, she took part in the Slovenian Youth Action at Nova Gorica.

In accordance with other school obligations, she made two school trips: with the ships Viševica and Jadran. What her first voyage looked like, we can get to know from her surviving Diary of Jolanda Gruden. Although the students of the first two generations at the Merchant Marine School indeed acquired the first practical naval knowledge during their school crusing in the Adriatic Sea, this practice could not be compared with the work and life on board the large ocean liners, on which they were liable to perform the cadet internship after their completed schooling.  This is why the school participated with the naval agency Agmarit from Piran and with the shipping company Jugolinija from Rijeka. Agmarit’s ships accepted the students with the nationality of the Free Territory of Trieste, while the students from other parts of Slovenia and those with Yugoslav nationality were sent to Jugolinija’s ships. It was agreed that priority in employment is to be given by maritime firms to the seafarers of Slovenian nationality who graduated from the Naval School in Piran.
After graduating and working for two months in the building of Nova Gorica within the frame of Youth Work Action, Jola got herself a job. On 6 October 1950 she signed a contract for a period of one year as a cadet – probationer for the Rijeka firm Jugoslovenska linijska plovidba.  As a lieutenant probationer she boarded the ship Hrvatska, which sailed on the Adriatic – North America line, and together with Sava participated in the loading of the first American aid to be transported to Yugoslavia. She stayed on this ship till August 1951, when she boarded the ship Bosna; she sailed with it for nine months. In May 1952 she went on well-deserved vacation and then from August to December 1952 sailed on board the ship Titograd. During her sailing internship she crossed the Atlantic Ocean nine times and visited most European, Mediterranean and North American ports.

By sailing on three different ships, Jolanda fulfilled the conditions to prepare for the profession of ocean-going lieutenant. In February 1953 she went to Kotor and passed the exam with distinction. The exam was taken at the same time by her former schoolmates from Piran, Andrej Spetič and Milan Mahnič, who chose the conscientious Jola to take care also of their finances »to prevent them from spending all their money …«. From 4 December 1952 to 31 March 1953 she was on unpaid leave, and on 25 May 1953 her employment with Jugolinja Rijeka was terminated at her request.

As women were no longer allowed to be employed on ships from the beginning of 1953, she returned  home to Nabrežina. According to Jola's statement given to the journalist Aleksa Vojnović, this was most pleasing her father who in fact never came to terms with her seafaring profession. He could never fully understand why his daughter is so very attracted to the sea and ships. Specifically, the Grudens had never been a seafaring family, which meant that she could not have taken up this attachment and tradition to the sea from them. As she said later on, her life path simply brought her to the sea, although she even wanted to be an airplane pilot, just like Sava.

In March 1953 she was offered a job at the MEDITERRANEA in Trieste, a general agency for Jadranska slobodna plovidba from Rijeka and, at a later date, Splošna plovba Koper and Kvarner from Umag, both established in 1954. In Trieste, she worked till 15 January 1956. She left, since on 20 February 1956 she married, in Nabrežina, Captain Srečko Mažer, a charming seafarer from Kostrena whom she had met while sailing with the Titograd. Together they had served on this ship only a little more than a month, from her boarding the ship on 4 August 1952 to Srečko Mažer's disembarkation on 13 September 1952, but this short period stretched into a lifelong relationship.

After marrying, Jola lived for few years with her little daughters together with her husband's mother in Kostrena, but then built with him their own house in Rijeka. The daughters prevented in her, according to their mother's words, any thought of returning back to the sea. »Sailor Jole« became a wife of a seafarer, supporting all four corners of the house. She was bringing up the two girls and taking care of everything during the husband's absence until his retirement in 1978 and even more (after retiring, Srečko Mažer continued working also on some foreign ships). She gradually got used to live on land. The same as other wifes, she regularly followed the movement of ships in newspapers, magazines and over the radio, and patiently waited for the postman. She differed from other women only by knowing exactly what her husband was doing at sea, what his life was like, and how his breaks in ports went. After her daughters grew up and became secondary school students, she sailed several times, of course as a passenger and the Captain’s wife. Here and there she was joined by both girls.

Jolanda was closely associated with the sea her entire life, initially as a naval school student, then as an active seafarer and finally as the wife of a mariner, ocean-going captain and ship master. She kept telling to her daughters much about her life in her youth and about her fairly special sailing period, about her primary family in Nabrežina and ancestors. She remained extremely closely connected with her family in her native Nabrežina. She always spoke in her native dialect with the girls. She never broke contacts with the places in which she lived and worked, and was proud to be a Slovenian living in a neighbouring country. 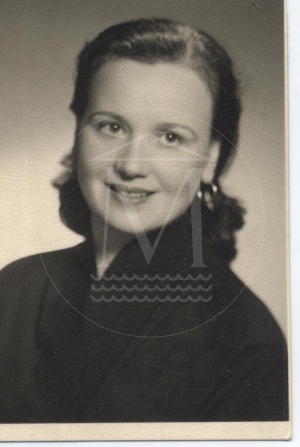