Mirko Bogić’s life was emphatically marked by the sea and sailing. He played a prominent part in the establishment and further development of sailing as well as its recognition in Slovenia and Yugoslavia as a whole. He is considered the pioneer of organized post-war sailing in Slovenia. He co-founded the Cveto Močnik Maritime Navigation Society in Ljubljana in 1949 and took the leading role in its sailing section. The latter eventually became independent and adopted the name Ljubljana Sailing Club, over which he then presided for 25 years and later became its honorary member. He did his best for the club to acquire its first sailboats in Piran, together with club premises and sailboat moorings in the harbour of Piran. Considering the fact that Piran was part of Zone B of the Free Territory of Trieste in those times, they club was liable to obtain a special permit from the Ministry of the Interior for every single sea voyage.

The life of Mirko Bogić was no doubt highly interesting and diverse. He covered his first nautical miles on board with his father's cutter in the area of the Port of Šibenik, in the Kanal sv. Ante, and on the route leading to the Jadrija swimming pool. Later on, he sailed a larger batana, but when this vessel was sold after his father's death, he opted for a slightly updated old cutter once more, always utilizing its sails, never a motor. After graduating from a secondary school in Šibenik, he studied at the Military Academy in Belgrade from 1931 to 1936 and acquired the title of naval officer. During World War II he joined the Home Guard in Koprivnica. As a true Dalmatian, he accepted the task of building a ship; he ingeniously added a canvas sail to it, as well as a keel made from a piece of a railway bridge. He also sailed on Lake Šoderica far from the sea. After being transferred to Goražde, he somehow managed to get a little canoe and paddled it up and down the Drina Driver.

Immediately after the war, he chose Slovenia as his second homeland and moved to Ljubljana in 1945. Initially, he worked in the Chief Administration for the distribution of medicines and medical implements sent to Yugoslavia by UNRRA, and eventually in the Administration of the Academy of Performing Arts. Concurrently, he was boating and even sailing on the Ljubljanica River. In 1956 he enrolled at the Faculty of Natural Sciences in Ljubljana to study geography. In 1961 he graduated there with his exquisite diploma thesis written in Croatian, titled "Development of weather in Slovenia in October 1959 and its impact on the hydroelectric economy"; he even received the highly coveted Prešeren Award for it. Owing to his academic success, he was offered a job in 1962 at the Geographical Museum at the Institute of Geography of Ljubljana University as a museum curator and worked there until his retirement in 1976. After each workweek “on land”, he returned down to the Adriatic Sea to spend a well-deserved sailing weekend there, and after retiring finally moved to Piran.

Mirko Bogić was not just a very good sailor, but an excellent geographer, too. He was able to closely associate sailing and geography into an organic hole, or the physical geography of the marine world, to be more precise. He loved to share his rich experience and knowledge with others. He was one of the pioneers in the sphere of sailing and meteorology teaching. He taught numerous young people sailing skills, participated in countless regattas, won more than a hundred of them, and was the mastermind and initiator of the now famous Šavrinska Regatta. He wrote a number of articles and books on the subject of the Adriatic Sea, sailing and navigation. The sea, weather, sailing, winds and harbours between Piran and Šibenik were no mystery to him. Quite often he underlined that the heart, too, is important for sailing apart from the head. Even in his ninety-ninth year, Bogić was still loyal to his sailboat L5 "Maištral", with which he often crossed Piran Bay as well as sailed down the Adriatic to his hometown Šibenik in the company of his life partner Savina Gorišek. He had his sailboat moored immediately in front of the Maritime Museum Sergej Mašera, next to the Galeb, the museum sailboat. The museum workers often watched with great admiration how he boarded his “Maištral”, untied or tied it, how he sailed off or just rested on it catching the sun rays. He always evidently and immensely enjoyed his stay on board of his boat. He celebrated his venerable 100th birthday in Piran. Two weeks later, on July 28, 2016, he quietly ended the journey of his life.

While the Piran Maritime Museum was preparing a memorial meeting titled Bogić and the Sea / In the Sails of Memory / Memorial Meeting – it was held on 2 December 2016 – his life companion Savina Gorišek, daughter Biserka Gruden, granddaughter Kristina Gruden, son Mladen Bogić and few friends, a major part of Mirko Bogić's personal legacy was donated to the Maritime Museum in Piran, which speaks not only of his long, fruitful and rich life, but also of maritime enterprise and its development in our region, as well as of highly interesting social conditions in those times. And to conclude this article, let us quote the following thought written about Mirko Bogić by the Slobodna Dalmacija journalist Jordanka Grubač:  “He was on both shores, Slovenian and Croatian, a worthy ambassador of both sides. Mirko Bogić was a seafarer of the sea that unites.” 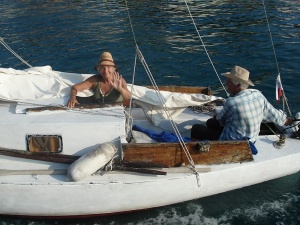