Silk embroidery with the image of the ship Kaiserin Elisabeth

The embroidery was made to order of seaman 1st class Leopold Voje, born in 1894 in Ljubljana, in remembrance of his travel and sojourn in East Asia.

Leopold Voje joined the Navy in 1912 and took a course for junior non-commissioned torpedo officers. In 1913, he sailed with the torpedo cruiser Kaiserin Elisabeth to East Asia, where she joined, in 1914 in Qingdao in China, the German forces in the German-Japanese war. After their defeat, the majority of the crew was taken to captivity in Japan, from where Leopold Voje returned home in 1920, together with members of other Yugoslav ethnic groups. In Japan, he was imprisoned in the Narashino Camp.

From East Asia, Leopold Voje brought silk embroidery, made in 1916 to order by Yamota from Japan. The embroidery portrays the ship Kaiserin Elisabeth and the Japanese eagle above her, holding the Austro-Hungarian flag in its claws. On the flag, which flutters on the top of the embroidery, the following inscription can be read:  »ZUR ERINNERUNG AN MEINE REISE CHINA JAPAN 1912 1916«. Above it, a crown is depicted. On the bottom of the embroidery, Leopold's name appears. In 1975, he sold the embroidery to the Maritime Museum Piran.

Country of origin: Japan
Made by: Yamota
Made in: 1916
Purchaser: Leopold Voje
Country of use: Japan, Yugoslavia
Time of use: 1916–1975
Material: silk, embroidery, wood, glass
Dimensions: width 49 cm, height 65 cm 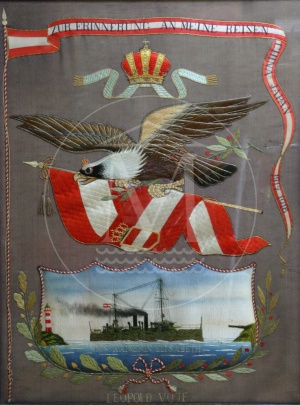