The publication titled Journey Home, The Returning Seafarers is a catalogue issued for the exhibition on personal stories of seafarers who during the wars found themselves, for different reasons, intentionally or unintentionally, in foreign countries, far from home, and their journeys home. It speaks about the impact of historical events on the life of every individual. Although departures and returns were something completely usual as far as seafarers were concerned, the wars strongly marked their destinies and made their usual returns impossible. In the countries they had been sent to these men fought or found themselves in captivity. During their prolonged return, however, the conditions changed at home, too, where there was no more place for some of them.

The catalogue presents six Navy and merchant navy mariners on their way home after World Wars I and II and after the breakup of Yugoslavia. Mariners with utterly different stories, returning from different continents, were chosen. Petty Officer Anton Lipovž is a representative of a group of Slovenian mariners of the Austro-Hungarian Navy, who spent World War I in POW camps in Japan. Ciril Somrak, NCO in the Yugoslav Royal Navy, was captured while returning home from Boka Kotorska after the capitulation of Yugoslavia in April 1941by the German occupiers and taken to captivity in Germany. Anton Jasnič was captured, as Italian soldier, during World War II in Algeria by British units. At the same time, Marcel Blažina escaped from the Italian Navy with the Overseas Brigade NOVJ. Merchant navy Officer Branimir Velkaverh spent World War II in British Guyana, USA and Great Britain. The story of Marjan Pogačnik, Rear Admiral of the Yugoslav Navy, who was the Commanding Officer of the 5th Military Naval Sector in Pula in the year Slovenia gained its independence, is also tragic.

The Maritime Museum Piran prepared the exhibition within the framework of the multiinstitutional project Journey Home, the instigator of which was the National Museum of Contemporary History.

The catalogue is written in Slovenian, the summary in Italian. 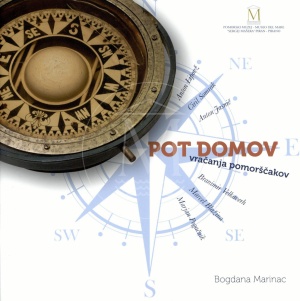