In the light of archaeological finds

The publication that supplements the exhibition entitled »Eternal Piran in the Light of Archaeological Finds« presents separate archaeological sites in Piran, i. e. immovable archaeological heritage as well as some small finds from prehistory to the more recent times. As the essence of the matter, a 6th century peacock-shaped brooch found in 1991 in the Church of St. George was chosen, given that the peacock is a symbol of immortality and eternity. Therefore, corporate archaeological artefacts as well as parts of objects that were found in Piran during archaeological excavations and examinations or randomly on land or sea floor are presented. Although the book presents several just partially preserved items, these had once been parts of a whole and are also treated in this way. Some objects are emphasized more explicitly, such as prehistoric items found during archaeological excavations at Židovski kare in the area of Stari trg, Roman amphorae from the sea floor, ivory box from the Church of St. Georg, belt buckle found near the Town walls, individual stone monuments, etc. In order to achieve as complete presentation of Eternal Piran as possible, an interlacement of archaeological sites and archaeological finds, which speak of the continuity of life in Piran from prehistoric times onwards and create a single unit, is presented at the exhibition.

Edited by: Maritime museum "Sergej Mašera" Piran, 2013 (The book is written in slovenian and italian language- Summary is in english language) 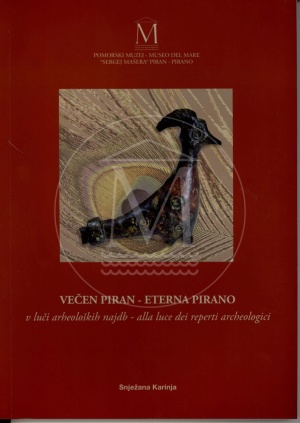