The book “Belo zlato krilatega leva. Razvoj severnojadranskih solin v obdobju Beneške republike (White gold of a winged lion, development of the northern Adriatic salt pans during the Venetian Republic)” is based on the author's PhD dissertation and it was published by the Piran Maritime Museum.

The purpose of this work is to present development of the northern Adriatic salt pans during the Venetian Republic, with an emphasis on the Piran salt pans. It describes in detail the system of salt extraction, maintenance and construction of salt fields, production and storage of salt.

In the past, salt was highly significant raw material, for it was the main preservative in the preparation and storage of various foodstuffs (meat, fish, vegetable, cheese, etc.), but also used in livestock farming, medicine, leather industry, glassmaking and the like. Salt was produced in all possible places and from all possible sources: mines, salt lakes, springs and sea. In the Mediterranean, two traditional systems of salt produced from seawater have been utilized, conditioned by geographical and climatic conditions. In the regions with little precipitation (northern Africa, Greece, southern Apennine Peninsula, Sicily, Sardinia), salt was gathered once to three times a year (e.g. Trapani), while in the central and northern Adriatic, where the number of rainy days were on average much higher, it was harvested daily or at least every two to three days. The system differ also in the manner and intensity of work, which affects production costs and the number of workers.

In Europe, salt production and trade was regularly controlled by local as well as central governments, providing a steady source of income for them. From the 11th century onwards, the need of salt increased in proportion with the population growth. The increased demand lasted till the mid- 14th century, when the population was badly decimated by the cyclically occurring plagues. A major crisis in salt trade was well felt also in the period of the 17th century Thirty Years’War. If some 90% of all produced salt was used for alimental purposes until the end of the 18th century, this share fell to the value between 10 and 20% by the end of the 19th century. Nowadays, less than 5% of salt is used for food, the rest going for industrial and agricultural purposes.

The Venetian Republic owes its existence in the Early Middle Ages to fisheries and salt making, given that maritime trade and other activities played a more significant role much later. The Venetians soon abandoned the salt-pans built in the vicinity of Venice due to their demanding maintenance and the specific functioning of the lagoons. Later, a similar fate befell the pans in the surroundings of Chioggia, which covered some 2,500 ha during their peak. Salt began to be imported from various Mediterranean salt-pans (Balearic Islands, Sardinia, northern Africa, Cyprus, Sicily, southern part of Apennine peninsula, Greek islands), while after the conquest of the coastal part of the eastern Adriatic it was increasingly imported also from Istrian, Rab and Pag salt-pans. As the Venetian treated all salt-pans from Pag to Muggia as single salt region (with the same production technology and similar salt quality), the same rules and regulations applied for them.

The book is written in slovenian language. Summary are in italian and english language 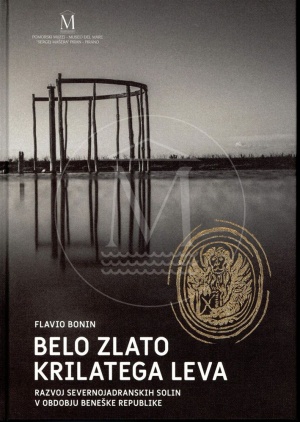