Presentation of the book "El Tartini in piassa"

The new book of the Maritime Museum, written by Duška Žitko, on the history of the monument to the great Piranian musician Giuseppe Tartini has been just published. The book, in three languages (Slovenian, Italian and English), describes Piran in the second half of the 19th century as well as the background and preparation for the largest public event ever organized in Piran; the inauguration of the Tartini monument in 1896. The title is inspired by the well-known exclamation of pride Piran citizens present at the ceremony. The book will be presented at Tartini Square and Tartini's Birthday house on Wednesday, February 5, 2020 at 11am. With this presentation, just before the Slovenian Culture Day, the series of cultural events that will accompany the 250th anniversary of the of Tartini's death (Tartini 250) also begins. On this occasion, you will be able to purchase the book with a 20% discount. 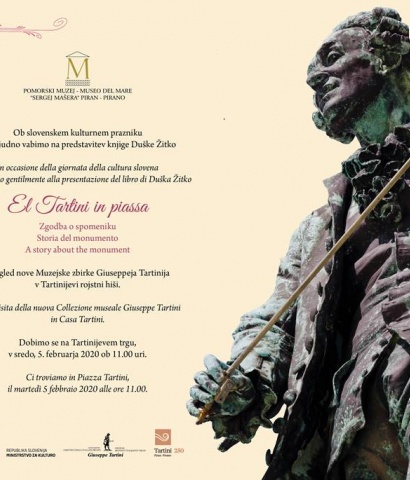