The Holocaust in Istria – a lecture by Boris Hajdinjak

75 years ago, on January 27, 1945, the Auschwitz Concentration Camp was liberated, the most ill-famed Nazi camp in which around 1.1 million people, including about 1 million Jews, were exterminated in the 1940-1945 period. For this reason, the date of the Auschwitz camp liberation was chosen as the Holocaust Remembrance Day –in remembrance of the systematic destruction of all groups of people who were undesirable owing to their race, religion, sexual orientation or health status in Nazi Germany.
In remembrance of this Nazi crime, the Maritime Museum "Sergei Mašera" Piran hosted Boris Hajdinjak, historian and Director of the Maribor Synagogue, on Tuesday, January 21th, 2020,  at the former Monfort Salt Warehouse in Portorož. In the hall packed with people, he held a most interesting and soul-stirring lecture entitled The Holocaust in Istria, the victims of which were also Slovenes and inhabitants from the Slovene ethnic area and the people of  various nationalities from Istria, including Piran. 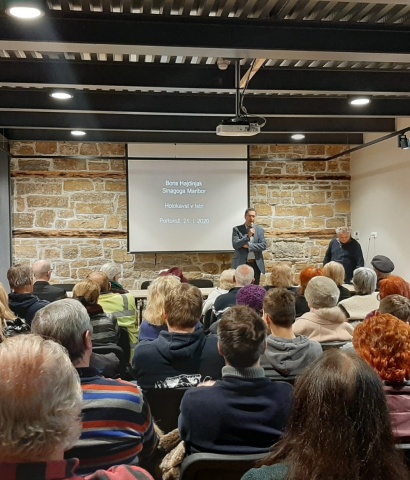