The collection of postcards with marine motifs from Srečko Potočar

The Maritime Museum »Sergej Mašera« Piran holds, among other things, a rich collection of postcards with marine, national traditional and ship motifs. They exhibit the local region of modern-day Slovenian Istria and Trieste, Adriatic, Mediterranean and other places elsewhere in the world with their littoral characteristics in different periods of the 20th century. Most of them also exhibit all kinds of ships, from small fishing boats to the largest cruisers. Ship motif postcards constitute an interesting historical source not only for the development of vessels, but also for the research and description of life on board ships.

Some of the postcards are drawn, the majority of them photographs. Although they were published for propaganda and commercial purposes, they became precious documents of a certain time, place and events owing to their wide distribution and popularity. This is why they are of exceptionally documentary and historical value. They bear witness to the historical development, events and political and economic changes in the presented regions and motifs.
And that's not all. Postcard is an interesting double source, its face presenting a littoral place, a ship cutting through waves or quietly landing in the dock, passengers on board this ship or on piers. Its back side, however, may at times be even more interesting, considering that many people's destinies are revealed in fragments on it. 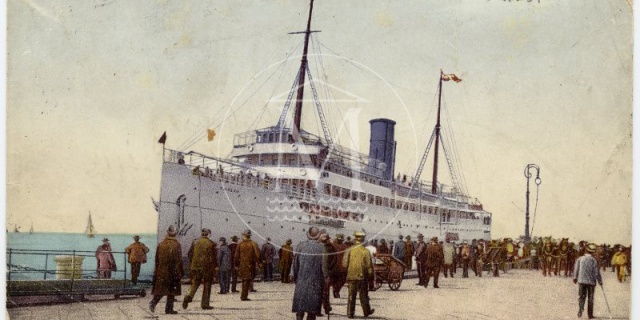