The biographical book of the consultant of the Museum of the sea "Sergej Mašera" Piran Nadja Terčon about Sava and Jolanda tells an interesting life story about the first Slovenian-Yugoslav  female sailors and the intertwining of their stories within the political, economic and social conditions and circumstances of the time.

The girls became a real sensation after the initial resistance and resentment for entering a previously exclusively male profession, in which women on ships were even banned for allegedly bringing bad luck and causing shipwrecks, also because of their attractiveness.

They were emancipated, modern women of their time, paving the way for other girls who were attracted to the maritime profession and became role models to future generations.

With the help of personal diaries, rich written and pictorial sources, numerous articles, testimonials of former classmates, co-workers and especially the daughters of the former sailors, the book describes in detail their interesting life stories from early youth, schooling, employment to retirement. 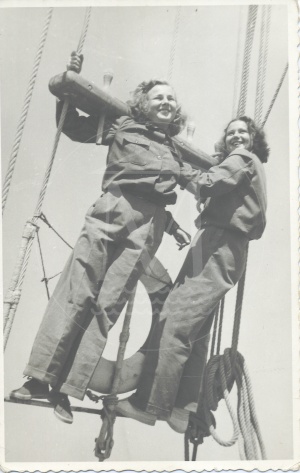