One of the most important studies carried out  by the experts of the Maritime Museum Piran, which included various museum works, is historical development of the Port of Piran. In 1993, the first exhibition on this topic was opened and the catalogue "The Port of Piran from the ancient mandracchio to its current appearance" released. As virtually no information was available in those years  on the research topic, the main task was to review archival material in the archives of Piran, Venice, Koper and Trieste. At that time, interest was focused mainly on the development of the Port of Piran and its economic role, in fact, the maritime transport that took place there. A special study was also dedicated to the organization of the Maritime and Medical Administration and the surrounding architecture of present day Tartini Square.

In the making of the publication, edited by Nadja Terčon and Jože Hočevar, several authors and experts took part. Flavio Bonin wrote about the Port of Piran during the period of Venetian rule, Nadja Terčon about the Port of Piran and its development during the period of Austrian rule as well as about naval organization in the Austrian Empire, and Sonja Ana Hoyer about the architecture of  Tartini Square. The catalogue was designed by Dušan Podgornik. 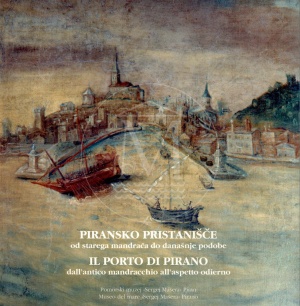