The book “THE SEA WAS IN FLAMES” by dr. Nadja Terčon speaks about Sergej Mašera (11 May 1912 – 17 April 1941), a navy officer, Lieutenant Commander, national hero and recipient of partisan memorial plaque, became part of Slovenian and world naval history owing to his heroic act, which raised the soldiers' morale, became highly esteemed at home and abroad, and was immediately considered – for the reason that it was committed in accordance with international military ethics – an act of great heroism and sacrifice. On 17 April 1941, immediately after the Yugoslav Army's capitulation, Sergej Mašera blew up, with the help of Lieutenant Commander Milan Spasić, the Zagreb destroyer in Boka Kotorska, sacrificing his life in the process.

Sergej Mašera was born in Gorica. In May 1915 the Mašera family, which had its roots in the area of Kobarid, withdrew from Gorica in the maelstrom of war. After the end of the war and collapse of the Austro-Hungarian Empire, the Mašeras decided not to return to Gorica but to settle in Ljubljana due to the changed political situation as well as father Franc’s conception of the world and clearly expressed Slovenian patriotism and community spirit. In Ljubljana, Sergej completed his elementary and secondary schooling. After passing his exams he enrolled at the Military-Naval Academy in Dubrovnik, where officers of the Yugoslav Navy had been educated and trained since its founding in 1923. In 1932, he graduated from the Academy and embarked on his officer career as Sub Lieutenant, initially on board the outdated torpedo ship T5 and eventually on the ship Sitnica. As he was particularly attracted to large-calibre guns, he specialized in artillery. He took the »notorious 3rd artillery course« at Kumbor in Boka Kotorska, »which gave him more than all professors together«, and concluded it in 1934…

You can read more about his interesting life story and happenings in the book.

Edited by: Maritime museum "Sergej Mašera"Piran, 2017 (The book is written in slovenian language. Summary and subtitles to pictures are in slovenian, italian, english and croatian language) 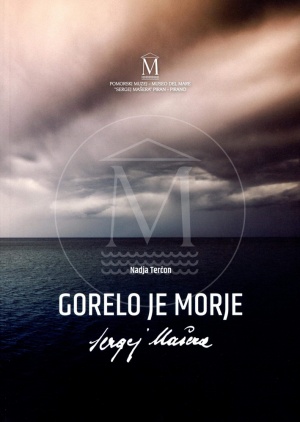