Since its founding in 1954, the Maritime Museum »Sergej Mašera« Piran has had its seat in the two-storey Gabrielli Palace, which is classicist style architecture of highest quality in Piran.

Gabrielli Palace and its constructors

It was built in the 1849–1851 period by the Ludovico Gabrielli family and his wife Regina from the Piran Rota Count's family. The special triangular floor plan fits well with the town's location along the Piran inner harbour.

The characteristic classicist facade envisages a suitably elegant character of the building's interior. The entrance halls with the recently discovered original ceiling and wall paintings is slowly gaining its former splendour. The stone stairway with the immense monolithic columns leads to the first floor with original ceiling paintings, decorative stuccos and marbled walls, which give the transition rooms overlooking the Piran harbour a very special charm.

The Palace's south wing ends with a small disc-shaped salon, owing to which the Palace was once called La Rotonda. North wing of the Palace, which would be much wider and would fill the space of today's city park, unfortunately remained unfinished.

Uncovering of the original wall paintings

On the Gabrielli Palace's ground floor, uncovering and restoring of wall paintings in neo-classicist style from the first half of the 19th century still continues today. 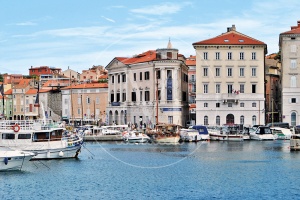