From Kanal, the town of his birth, his family moved to Ljubljana in 1918. Initially he attended NCO School in Šibenik and completed a course in radiotelegraphy. In 1935 he boarded the merchant ship Trepča and sailed aboard it till 1938. A year later he joined the ship Aleksander and stayed with her until October 1943. Thereupon he boarded the Timok and sailed on her till 25 February 1946. This ship was known for its National Liberation Movement centre. Its crew raised the Yugoslav flag and published the newsletter Preporod, which was distributed between Yugoslav ships' crews and sent to Yugoslav emigrants in Canada. The ship docked in Trieste on 1 June 1945. Ivančič returned to his homeland in 1946. After the war, he was interned on Goli otok. Upon the founding of Splošna plovba Portorož, he accepted employment in this company, where he carried out various duties until his retirement. 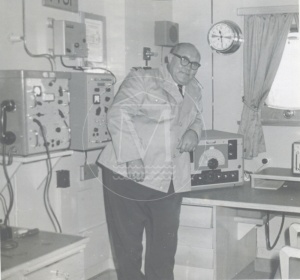