Shipbuilding is considered one of the oldest branches of industry on the coast of Istria, with its roots reaching back to at least 14th century, considering that the first written sources about a shipyard in Piran are dated to 1322. It is mentioned in the statute of Piran. From then on, it has been constantly part of economic activities of the people of Piran.

In the 19th century, Piran had three shipyards; in the middle of the century they were moved to a place below the Monastery of St. Bernardin. Here, shipbuilding masters were building and repairing wooden ships – from the smallest and simplest fishing boats to bigger cargo and fishing ships (batanas, peligs, trabacolas, bragozzi …). The vessels were built primarily for coastal navigation and local commissioners. The same was in Koper and Izola, where several smaller shipyards and boatyards were active till the Second World War. In Izola, the fish processing factories Ampelea and Arrigoni even owned their own shipyards. In 1951, the three shipyards at Bernardin were transformed into a single yard, which after being renamed and reorganized a couple of times functioned till 1974, when the »2. oktober « shipyard from Piran was moved to Izola. At that time, the company specialized particularly in repairs and reconstruction of all types of vessels, but no longer exists today. 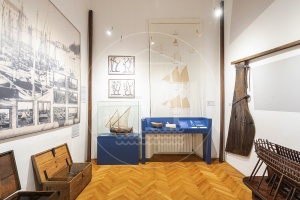