BETWEEN SEA AND LAND

The exhibited archaeological collection speaks of the oldest sea routes and links between the inhabitants of the Slovene coast of the Adriatic and the inhabitants of the neighbouring coasts from prehistory onwards. The finds excavated in a number of caves in the Trieste Karst (Pejca at Lašca, Pečina below Muzarji, etc.) and at Sermin near Koper originate from the Neolithic – Late Stone Age – and evidently speak of humans and their symbiosis with the sea, contacts between different cultures in the Adriatic, their impacts on each other as well as of their beliefs.

Apart from the fragments of earthen vessels of the Danilic and late Hvar cultures, tools made of flintstone and bone are exhibited in Display Case 1, including a bone harpoon found at Pejca at Lašca.

The collection also includes a number of Bronze Age artefacts found during the archaeological excavations at Kaštelir above Korte near Izola, Sermin and Piran. The contacts with the people living on the neighbouring coast of the Adriatic were particularly frequent in the Early Iron Age, of which speak the exhibited articles found at Kaštelir above Korte near Izola, including the Apulian crater (wine bowl) from the 6th century BC. A special place has been allocated to the Roman material remains found in the area of the numerous coastal rustic villas (Fornače near Piran, Fizine near Portorož, Lucija, Grubelce in the Sečovlje valley) and ports (Simon Bay and Viližan near Izola, Fizine near Portorož, Jernej Bay near Ankaran).

Under the glass paving, which symbolically delineates the surface of the sea, several Antique and Late Antique archaeological artefacts are displayed, which have been obtained in different places along the Slovene coast during archaeological surveys of the sea floor, underwater excavations, incidentally in the nets of the local fishermen, or during diving by individuals. The numerous fragments of the east Mediterranean and North African Late Roman amphorae, found during the archaeological excavations in Koper and Piran, bear witness to a still active maritime trade in the 6th and 7th centuries, when goods traffic indeed died down but did not actually die out due to these very sea routes. From this period also originates the first written mention of Koper and Piran. In his Cosmography from the 7th century AD, an anonymous geographer from Ravenna referred to, among other Istrian towns, Piranon (Piran) and Capris (modern-day Koper).

Although the exhibition presents just a handful or archaeological finds from the Middle Ages and the New Era, the Maritime Museum Piran houses much material that corroborates intensive trade links between littoral regions along the Adriatic, particularly with those from the nearby provinces of Veneto and Friuli. 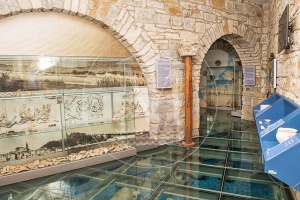 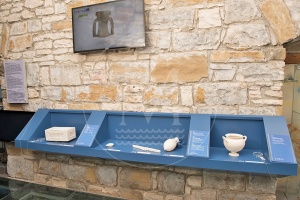